Elinor Ostrom, Arthur F. Bentley Professor of Political Science, is Co-founder and Senior Research Director of the Workshop in Political Theory and Policy Analysis, Indiana University-Bloomington. She will discuss revitalizing cities by incorporating economics, government, and environmental sustainability. Professor Ostrum was awarded the 2009 Nobel Prize in Economic Sciences, and she will lecture on issues related to water resources. She is the first woman to win the Nobel Prize in Economic Sciences, which has been awarded to 62 men since its launch in 1969. 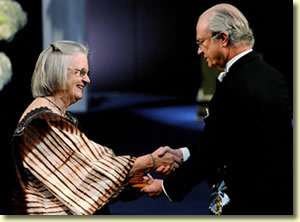 Ostrom is the leading scholar on problems related to “common pool” resources. Her work emphasizes how humans and ecosystems interact to provide for long run sustainable resource yields. Forests, fisheries, oil fields, grazing lands, and irrigation systems, among others, all exhibit the characteristics of common pool resources, and Ostrom’s work highlights how humans have created diverse institutional arrangements over natural resources for thousands of years that have prevented ecosystem collapse.

Sponsored by: The Meyner Center for State and Local Government, The Departments of Policy Studies and Geology & Environmental Geosciences , and the Environmental Initiative grant from The Andrew W. Mellon Foundation.