Lafayette and Easton Receive $200,000 National Endowment for the Arts Grant

Funds will support the ‘Art of Urban Environments’ festival, the first of its kind in the U.S.

President Daniel Weiss, NEA chairman Rocco Landesman, and Easton Mayor Sal Panto at a national press conference announcing Lafayette and Easton as the recipients of a grant to support a major arts festival. 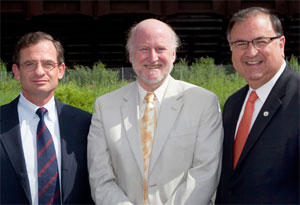 EASTON, Pa.(www.lafayette.edu), July 15, 2010 — Lafayette and the City of Easton were awarded a $200,000 grant from the National Endowment for the Arts to host an arts festival that will be the first of its kind in the U.S. The grant was awarded through the NEA Mayors’ Institute on City Design 25th Anniversary Initiative (MICD 25).

Called the “Art of Urban Environments,” the festival will showcase between eight and 16 juried outdoor sculptures and art installations that will be constructed on Lafayette’s campus and in the City of Easton. The project will involve more than 35 private and public partners.

The festival will kick off on Earth Day in April of 2011 and continue through Columbus Day.

Of 21 grant winners, Lafayette is the only college or university nationwide to receive funding.

“It will allow us to place various installations throughout the College and city and will provide people opportunities to interact with art in a variety of ways,” says President Daniel H. Weiss.

The installations will be selected from emerging artists, both locally and across the globe, and will serve as places for arts performances and activities. The labor, material, and design inspiration will be drawn from Easton’s West Ward, the city’s most diverse and economically challenged neighborhood.

Some installations will be part of a group of model “Eco-Houses,” West Ward homes rehabilitated to green and historic preservation standards, where artists, craftspeople, and students can live and work.

The festival is expected to attract an estimated 45,000 visitors during its six-month run.

“Arts, entertainment, culture, and tourism are the four points of our new economy in Easton,” says Easton Mayor Sal Panto, a member of the U.S. Conference of Mayors. “This grant will help us promote the arts even more to visitors and residents.”

The festival will also celebrate completion of the first-phase of the Bushkill Corridor, a mixed-use area along a tributary of the Delaware River. The $20 million project includes a new “arts and nature” urban trail (part of the regional greenways system linking the Appalachian Trail to the Morris Canal towpath, a proposed Lehigh River “Eco-Park,” and the Delaware and Lehigh National Heritage Corridor.)

The Bushkill Corridor extends from the newly redeveloped riverfront in downtown Easton, past the College’s expanding arts facilities on N. Third Street, to a 15-acre former silk mill complex that will provide housing and work space for artists adjacent to the West Ward.

MICD25, the first grant program developed under NEA Chairman Rocco Landesman, supports creative place-making projects that contribute toward the livability of communities and help transform sites into lively, beautiful, and sustainable places with the arts at their core.

Bethlehem’s ArtQuest also received a $200,000 NEA grant, making the Lehigh Valley one of the top recipients of these one-time awards.