Lafayette College received a B from the Sustainable Endowments Institute in its annual Green Report Card, an assessment of sustainability in campus operations and endowment practices launched in 2007. The report for 2011 was released Oct. 27, 2010, via the Green Report card web site. 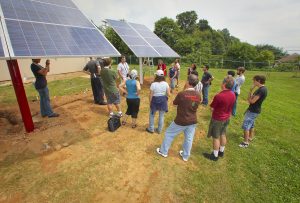 The College has made dramatic progress in just three years, rising from a grade of D- in the 2008 Report Card, released in fall 2007. Only a small number of the 322 institutions reporting in 2011 made the same or a slightly better improvement over the same period. Three other schools improved their grades as much as Lafayette, while only three institutions improved more than Lafayette.

“I am pleased to see that our efforts over the past few years have helped us to make meaningful progress toward our goal to be more effective stewards of our resources and the environment,” says President Daniel H. Weiss. “The improvement in our score over the past three years places Lafayette among the most improved colleges in the nation and this is the result of a concerted team effort. We recognize that there is much more work to be done, but we are prepared and up to the challenge.”

In fall 2007, when the College received a D-, initiatives reflecting the commitment of President Weiss and the administration to environmental sustainability were already under way. When Weiss signed the American College and University President’s Climate Commitment (ACUPCC) in January 2008, he said, “Campuses that address the climate change by reducing global warming emissions and by integrating sustainability into their curriculum will better serve their students and meet their mandate to help create a thriving ethical and civil society.” A Sustainability Committee of faculty, staff, and students was appointed to oversee environmental initiatives, and George Xiques was named manager of sustainability and environmental planning in December 2007.

Continuing with these initiatives, the College and Board of Trustees also adopted a new Campus Energy Policy in January 2009.

“The College has made steady progress in its commitment to sustainability by regularly discussing our collective long-term vision and plans,” says Mitchell Wein, vice president for finance and administration and chair of the College’s Sustainability Committee, “but also by making actionable decisions and taking tangible steps, even small ones, in the near term.”

Lafayette is in the second phase of a campus-wide energy audit. The Board of Trustees has authorized funding to implement energy conservation measures that will reduce energy and water usage, decrease greenhouse gases, and provide a net, positive financial return. Xiques reported that the campus HVAC system was changed to reduce the amount of “make-up” water by 15%, and repairs to the steam trap subsystems have reduced water consumption by 50% and reduced the energy required to produce steam. Landfill reduction rates have increased five-fold from 2% in 2003 to more than 10%. The College’s new parking lot on Snyder Street features LED lighting, which reduces energy consumption by 50% compared to traditional lighting standards.

Across the campus, the intensity of commitment to sustainability has led to a variety of significant achievements in a short period of time. Representative changes have included installation of solar arrays on Acopian Engineering Center and at Metzgar Fields, installation of water-saving fixtures in new and renovated buildings, use of 100% compostable packaging and dinnerware and organic cleaning supplies by Dining Services, re-direction of composted food waste from landfills to on-campus compost through the College’s new pulpers and Earth Tubs, adoption of a policy to strive for LEED certification for new buildings and renovations, establishment of an organic community garden at Metzgar Fields through student leadership and initiative, planting a vegetated roof on a portion of Acopian Engineering Center that filters water, stores carbon, and provides insulation, adding water stations for filling re-usable bottles as an alternative to single-use bottles, and setting up a green move-out program to recycle or donate unwanted items.

The College has also taken steps to encourage walking, riding bicycles, and using mass transportation.  The College’s shuttle service (LCAT) has been expanded, hybrid vehicles are now part of the College’s vehicular fleet, more bicycle racks have been added, and a pilot program for charging electric cars has been implemented. In addition, the College expects to begin a project in 2011 to convert two campus roadways — Pardee Drive and Quad Drive — to pedestrian walkways in keeping with the 2009 Campus Master Plan.

“Many of the projects and initiatives have been achieved by student and faculty leadership, energy, and support,” adds Wein, “The College-wide partnership is the foundation for the progress that has been realized.”

The College Sustainability Report Card is based on an assessment of each institution in nine categories, ranging from climate change and energy to green building and investment priorities. Research is based on publicly available information, surveys filled out by appropriate school officials and student groups, and an assessment of each school’s performance on more than 120 questions across 52 indicators in the following nine categories: administration, climate change and energy, food and recycling, green building, transportation, student involvement, endowment transparency, investment priorities, and shareholder engagement.

The Sustainable Endowments Institute is a Cambridge-based, nonprofit organization engaged in research and education to advance sustainability in campus operations and endowment practices. Founded in 2005, the Institute is a special project of Rockefeller Philanthropy Advisors and has received funding from Rockefeller Brothers Fund, United Nations Foundation, V. Kann Rasmussen Foundation, Kendall Foundation, Surdna Foundation, and the Nathan Cummings Foundation, among others.