Climate Change Lecture, "Why we need energy, why burning all the fossil fuels is not the best idea, and what we can do instead." Tuesday, February 21 @ 7:30pm, Colton Chapel 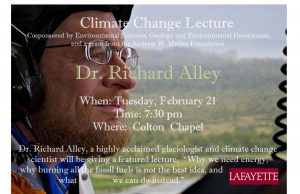 Dr. Richard Alley, a highly acclaimed glaciologist and climate change scientist will be giving a featured lecture, “Why we need energy, why burning all the fossil fuels is not the best idea, and what we can do instead.”
Richard is the Evan Pugh Professor of Geosciences at Penn State University, a member of the National Academy of Scientists, and a Fellow of the American Academy of Arts and Sciences and the American Geophysical Union. He is the recipient of many prestigious academic awards including the Seligman Crystal, the Louis Agassiz Medal, the Tyler Prize for Environmental Achievement, and many others too numerous to list in this note. Richard is the author of The Two Mile Time Machine: Ice Cores, Abrupt Climate Change, and Our Future, and most recently, Earth: The Operators Manual, a companion volume to the 3-part PBS series of the same name. Richard routinely testifies before committees of the U.S. Congress and the U.S. Senate on issues of climate change. He is a member of the Intergovernmental Panel on Climate Change, and as such, is one of many co-recipients of the 2007 Nobel Prize.