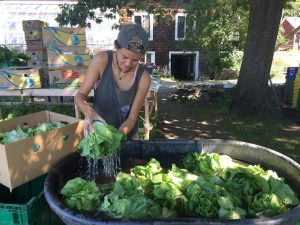 Maggie Noonan completed the EVST 100 Introduction to the Environment course her sophomore year and came to realize that environmental issues can be an academic mission and not simply a personal passion.  She then decided on a major in Environmental Studies.  Noonan considers her sophomore year to be her most transformative while at Lafayette.  Beyond declaring a major she really cared about, she also joined the swim team, became involved in Greek Life and increased her involvement in her a cappella group, Cadence.  “I felt like I became more a part of the community here,” Maggie recalled.

In addition to her involvement in campus groups and activities, Maggie participated in two study abroad programs.  During the summer after her sophomore year, she studied in Costa Rica through the School for Field Studies.  Sustainability and biodiversity were the focus of her studies while in Costa Rica.  Noonan completed more environmentally related and research based studies in Australia during her junior year through the School for International Training.  The focuses of her studies on this trip were sustainability and environmental action.  While studying abroad was a unique and positive experience for Maggie, she was also excited about her participation in the EVST 400 Environmental Capstone course. The fall 2016 senior capstone class focused on projects meant to improve ecological sustainability on campus.  Noonan said she and her classmates were “quite riled up” about the projects and plans discussed in the course.

Noonan also worked at a social environmental organization called Food for Free in the summer of 2016.  Food for Free is a food waste rescue and redistribution operation in Cambridge, MA that picks up excess food from restaurants, schools and farmers’ markets and distributes it to under-served populations.  Through the same organization, Maggie also worked at a farm to grow food to be used at a local homeless shelter, Pine Street Inn.  “The focus is on providing healthy food to people who would not be able to access it otherwise,” Noonan explained.