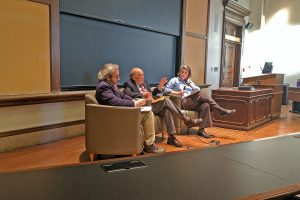 Woodwell is widely acclaimed for being one of the first scientists to issue warnings about climate change. He serves on the advisory board of the Duke University Nicholas School of the Environment, and on the Boards of Trustees of the Natural Resources Defense Council and the World Media Foundation. Woodwell was formerly the president of the Ecological Society of America, on the boards of the Woods Hole Research Center, the Amazon Institute of Environmental Research, the National Council of the World Wildlife Fund, and chaired the Ruth Mott Fund. He was also a founding trustee of both the World Resources institute and the Board of the Natural Resources Defense Council. 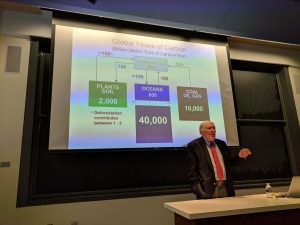 He served as a member of the Boards of Trustees of the Ocean Conservancy, Sea Education Association, and the Grand Canyon National Park Foundation.

While on campus, Dr. Woodwell also visited with Professor Cohen’s Environmental Justice course and presented a lecture titled “The Climatic Disruption: Environmental Chaos or an Exciting New World?” as part of the Life Sciences Seminar Series.