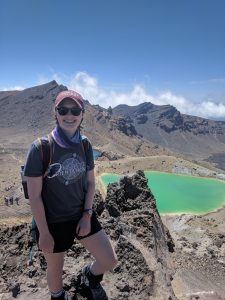 Brynn’s choice in majors has led her to some interesting experiences while at Lafayette. During the summer before her junior year and the fall 2017 semester, Brynn completed Excel Research with Professor Andrea Armstrong. The research looked at the connection between land use and water quality perception. Brynn’s work involved making maps and using geographic information system (GIS) technology to display data and findings in an easily accessible way to a wide range of viewers. She was able to expand her GIS skills quite a bit through her work with Professor Armstrong. Brynn also participated in research as part of her study abroad experience in New Zealand. Brynn studied in New Zealand through Frontiers Abroad’s program on earth systems. While abroad, one research project she worked on involved using GIS to analyze satellite imagery and better understand the migration patterns of humpback whales.

In addition to completing research on campus and abroad, Brynn had the transformative experience of being an Orientation Leader (OL) during welcome weeks at Lafayette. After having a very positive orientation experience as a first-year student, Brynn was excited to participate as a leader for other students. Being an OL helped her to grow her leadership skills and build relationships with first-year students as well as other members of the orientation team. Her junior year, she participated as one of the directors on the leadership team.

In the future, Brynn is considering a career in sustainable design. She would like to work in an environmentally focused field that incorporates her engineering education as well. When asked what advice she would give to students considering a major in environmental science or studies, Brynn stressed the importance of not getting discouraged. Although the current state of the earth can lead many to feel discouraged, it is also important to recognize that there has been tangible change and there is an opportunity to contribute to that change. That is what keeps her excited about the environmental field.