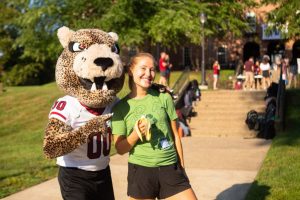 Prior to arriving at Lafayette, Lara Henderson watched several environmental documentaries and found them to be fascinating. She was mainly interested in the social science and humanities aspects of the environment, which piqued her interest in the Environmental Studies major. After taking the Introduction to the Environment and Water Poblems, Water Solutions courses, she was sure it was the major for her. Lara also has a minor in government and law.

Lara has experienced several unique opportunities during her time at Lafayette. For example, she works as an ECORep in an effort to improve and promote sustainability on campus. Last year, she was mainly in charge of social media and general student engagement for the program. This year, she has a more specific role of working on website development for the Office of Sustainability. In addition to working as an ECORep, Lara also participated in a study abroad program in Copenhagen, Denmark. Studying in Copenhagen was specifically appealing to Lara as it is considered to be one of the greenest cities in the world. Her study abroad program had a sustainability focus, and a detailed article on her experience can be found here on the Office of Sustainability’s website.

Lara’s most transformative experience while at Lafayette was living in the “Dog House” her sophomore year. Lara was part of the founding group of the program who were responsible for three young puppies, a demanding job. The experience transformed Lara’s time management and planning skills.

Beyond her contributions and work on campus, Lara also completed an environmental internship at The Trustees of Reservations, a non-profit organization located in Massachusetts. Lara took on a beach profiling role, collecting data on how a beach owned by the organization is being impacted by rising sea levels. Lara measured and mapped the beach and trained others on how to collect data.

After graduation, Lara hopes to pursue working for an environmental non-profit and potentially enroll in graduate school in a few years.