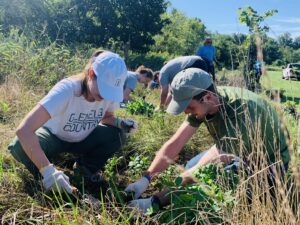 Evan’s interest in the environment comes from a perpetual appreciation and respect for the outdoors. Raised in Upstate New York, he got to explore much of the Adirondack region, Catskill region, and northern parts of the Appalachian trail. He loves to spend time outside running, hiking, stargazing, reading, and camping. His appreciation however goes far beyond enjoying the outdoors. With a scientist as a father and a librarian as a mother, Evan was always encouraged to dig deeper and to understand why things are the way that they are. This has driven him to view nature through the lens of a scientist, looking for interactions, causal relationships, and predicting the future of ecosystems.

Evan is double majoring in environmental science and mathematics with special interest in using statistical methods and machine learning to understand ecosystems. Starting his junior year at Lafayette, he began working in Dr. Rothenberger’s lab on a water quality project which began in 2010. Using the data from this long term monitoring study, he worked with Dr. Rothenberger and a former student, Sam Gleich ’17, to study the ecosystem using neural networks. His senior year he is continuing work with this system, but now using the data to pursue a thesis using random forest modeling to predict harmful algal blooms. Combining his environmental interest and mathematical ability has allowed Evan to carve out a niche within the expanding field of environmental science.

After graduating from Lafayette, Evan wants to pursue a PhD in environmental data science. He hopes to work for a government agency where he can continue working with large datasets to uncover patterns which may aid in conservation and restoration efforts. His long-time love for the natural world drives him to support conservation efforts in the hope that future generations have the opportunity to spend time in nature the way he did.