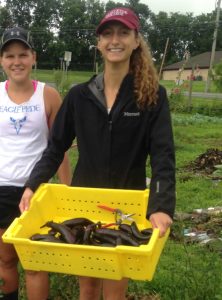 Alexa Gatti relocated to Seattle, Washington after graduating from Lafayette in the spring of 2016. In Seattle, she is currently working for both REI as a Sales Specialist and 3Degrees as an Outreach Associate. 3Degrees is a renewable energy marketing firm that partners with local utility companies to promote their green power initiatives to customers. As an Outreach Associate, Alexa has in-person conversations with customers to discuss their option to match their home’s energy usage with all renewable sources from local energy vendors. In other words, she promotes the purchase of renewable energy credits in wind, biogas, solar, low-impact hydropower, and geothermal energy. 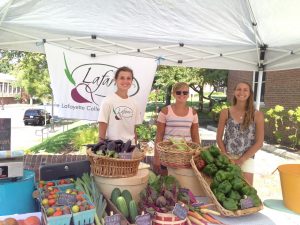 Gatti participated in an exciting study abroad program and also worked on the Vegetables in the Communities Program as part of the college’s Excel Scholars research program.  Gatti’s study abroad program was a comparative course that started in San Francisco and then went on to Vietnam, Morocco and Bolivia.  As part of her experience, she was able to talk with people who have been directly impacted by climate change and composed a research paper on food sovereignty and its relationship to environmental policies, specifically agricultural policies.  Gatti’s paper mainly focused on Vietnamese rice production and Bolivian quinoa production and how such production was impacted by climate change.  “It was very interesting to go into three different continents and see how people there think about the environment and how that translates into policies,” Gatti recalled of her experience.

Working on the Vegetables in the Communities Program was another great experience for Gatti.  As part of the program, she worked at LaFarm and Easton Urban Farm.  “Gaining experience on two types of farms – a school farm and an urban community-run farm – was really great,” Gatti explained.  The farming experience made her think about food access and nutrition.  Growing up, she never had to think about the cost of food or having access to food, and food justice became something that she is extremely passionate about.

Alexa’s most transformative experience during her time at Lafayette was serving as the president of the student organization, LEAP.  Being the president of LEAP was a major way for Gatti to be environmentally active on campus.  Being a member of LEAP also afforded her the opportunity to work with several professors and be a member of the school’s sustainability committee. “College is a smaller scale of society as a whole, so if you can make a change in college, then you can make a change in society on a broader scale,” Gatti stated, “It’s been a good experience for me to see change happen and work with other people towards a common goal.”  She felt she learned quite a bit about how institutions work and how people can most effectively work together.  Alexa added, “Change takes time, but it does happen.  It’s just a matter of bringing people together and being persistent.”