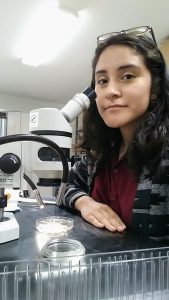 Karolina is working as an entomology lab assistant with the Stroud Water Research Center in Avondale, PA.

Karolina Vera was an Environmental Science major with a concentration in restoration ecology.  Karolina came to Lafayette knowing she wanted to study in an interdisciplinary program.  She grew up being interested in nature and always loved science, specifically biology, and the interdisciplinary Environmental Science Program appealed to a good combination of her interests. 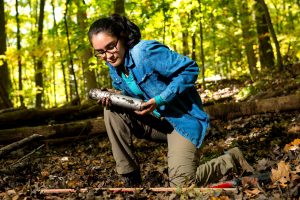 After arriving at Lafayette, Karolina channeled her interests into coursework, research, activism on campus and more.  Vera credits taking one course in particular, BIOL 272 Conservation Biology with Professor Megan Rothenberger, as her most transformative experience while at Lafayette. Vera described the course as eye-opening and involving the type of work she sees herself doing in the future. “Having Dr. Rothenberger as a professor and an advisor was very helpful,” she added.

Karolina’s interest in restoration and conservation was also the basis of her senior thesis project.  Through EXCEL research funding, Vera was able to start work on her thesis project in the summer of 2016. Karolina began her research with vegetation surveys that could only be completed during the summer.  Her thesis work continued to progress during her senior year along with the help of her advisor, Professor Rothenberger. Her thesis, “Comparison of Created and Natural Vernal Pools with Implications for Amphibian Habitat Restoration,” was presented in May 2017.

Vera was also been involved on campus as a member of the student group LEAP, Lafayette Environmental Awareness and Protection.  Karolina described the close-knit group as a way to “get close to people who have the same mentality and passion for environmental activism.” She recalled looking up to others in the group which helped her form her own views on campus environmental activism and become a leader on campus.  Vera served as LEAP’s President for the fall 2016 term.

Off-campus, Karolina also completed a summer internship with the New York City Department of Parks and Recreation during the summer of 2015.  The internship, which she chose from a wide range of internships on the department’s website, focused on monitoring salt marshes around the city that had been restored or degraded in some way.  Although Vera had always known she enjoyed hiking and camping and the outdoors in general, she wasn’t certain if she wanted her future job in environmental science to involve a lot of fieldwork. Her experience as a Salt Marsh Assessment Intern was her first experience with scientific fieldwork and she enjoyed working outside.