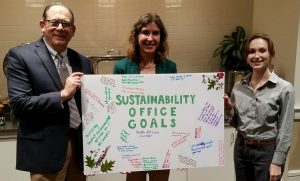 Miranda Wilcha returned to Lafayette in August of 2016 as the college’s first Sustainability Fellow.

While a Student at Lafayette...

Miranda Wilcha came to Lafayette as an anthropology and sociology major, and after taking the Introduction to the Environment course, something clicked.  Wilcha decided to add environmental studies as a second major.  Miranda considers herself to have a lot of egalitarian values and was seeking a way to make a positive, purposeful change in the world.  “I realized environmentalism was a vehicle to make this a reality,” she explained.  Wilcha felt that the multi-disciplinary field of environmental studies made the major a good choice to pair with another area of study. 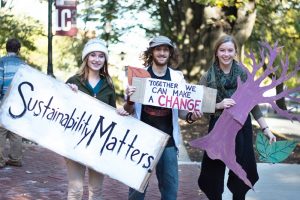 Wilcha (left) with some friends at the campus sustainability rally. Photo provided by Miranda Wilcha.

Miranda considers some of her most unique experiences at Lafayette to have come through lab work for her environmental courses.  Wilcha feels her experience in lab courses gave her the confidence to complete fieldwork even though she did not expect to take hard science related courses in college.  The labs made her want to get more involved.  “Labs have been both rewarding and interesting, as they let us apply what we’ve learned in the classroom to the wider community,” Wilcha added.

In addition to working on the completion of two majors, Wilcha was also very involved on campus and in the community.  On campus, she worked at LaFarm, volunteered with LaFFCo, helped LEAP during earth week, and made posters for a campus sustainability rally.  Wilcha also worked with the digital humanities library department as a summer scholar to create Garden of Easton, an app that helps users navigate local food access.  Garden of Easton maps out food banks/pantries, community gardens, CSA pickups and locations, farmers’ markets, and other sites where people of all backgrounds can access fresh local produce.

In the community, Miranda helped with the Vegetables in the Community Veggie Van, led clean-up crews along the Delaware Canal State Park, volunteered at the Nurture Nature Center, and worked for the Forest Service at Grey Towers in Milford, PA doing interpretive work.  Through all of these experiences, Wilcha said she developed ways to reach out to the community, communication skills, and group skills.  “Community support and integration is a vital component of effective environmentalism,” Wilcha stressed.  Working with people for a collective good is another important trait that Miranda felt she developed during her time at Lafayette.

Miranda credited much of her development to help from her professors.  Wilcha came to find that her professors were really enthusiastic, and even with their vast workload, they continuously helped her advance during her time at Lafayette.