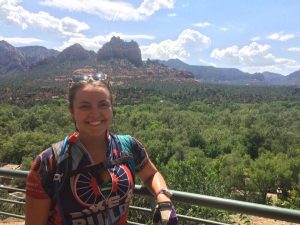 After graduation, Rachel spent two and a half months biking across the country with a program called Bike and Build. Rachel, along with approximately 29 other riders, rode from Portland Maine, to Santa Barbara, California from June to September – a total of 3,900 miles. Along the way, the riders traded in their helmets for hard hats and helped build at 16 different affordable housing sites. Each rider raised at least $4,500 which was donated to the affordable housing cause via a grant program. “It was an incredible experience and challenging both mentally and physically. Long days in the sun, with the same 30 people can be quite exhausting but also totally exhilarating,” Barron told of her experience.

After her bike trip, Rachel moved to Boston. She works in Cambridge at a marketing agency called Cambridge BioMarketing. The company specializes in rare disease therapies. Barron works as a medical analyst developing and maintaining the medical infrastructure of the company – organizing large volumes of data against strategically developed questions. She develops evidence tables, literary searches, and clinical trial analytics as well as discover trends in publication volume/type/audience and gender over time. She also maintains evidence tables and companion end note libraries. Rachel feels the classes and curriculum she went through in the Environmental Science program helped her develop the research and analytic skills she is using in her current job.

Outside of work, Rachel enjoys biking to and from work each day, camping in the White mountains (during warmer months) and skiing in NH, VT and ME most every winter weekend.