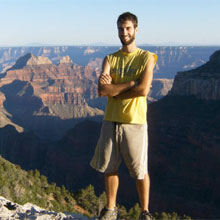 Thoughts on my academic concentrations: One of the things that I find attractive about geology is that it involves studying the earth with a very holistic approach. It’s important to be able to connect the biosphere to the hydrosphere to the lithosphere, and the ES minor has been a great way to synthesize the wealth of information that pertains to each of these disciplines. As a BS Geology major, the ES minor was relatively easy to acquire, and I think that it’ll improve my chances of getting accepted to good graduate programs and/or good jobs.

My favorite class at Lafayette: I’ve really enjoyed EVST 254 (Cultures of Nature), which I am taking to fulfill one of my ES requirements. This class has allowed me to explore ideas that I wouldn’t have been exposed to in any other class and has featured by far the best discussions of any class I’ve taken at Lafayette. It’s taught by two professors at once, and they keep the pace of discussions moving quickly. As an added bonus, all of the assigned readings are books that most people would read for pleasure.

I’m really interested in this environmental issue: Fracking!!! I was first introduced to the technology used in hydraulic fracturing in my Environmental Geology course, and since then there have been several guest speakers and movie screenings on campus related to this issue. Hydraulic fracturing is of particular concern in Pennsylvania because of the recent push for extraction in the Marcellus Shale formation. Since becoming interested in this issue, I’ve looked into the consequences of natural gas extraction and have met with local activists to discuss ways of increasing public awareness of the harmful effects it can have on people and the environment.

EXCEL research I’ve done: The summer after my freshman year (2008), I did research with Professor Malinconico. I was working on compiling gravity data in the western portion of PA with the intent of increasing the density of data points in the state’s Bouger Anomaly maps. In summer 2009, I worked with Professor Kney, helping with an analytical chemistry project involving nitrogen fixation in compost.

In summer 2010: First, I went on a month-long road trip across the US in a renovated school bus, where we traveled between national parks and experienced all the sights and sounds and wonders of the American West. Then, I spent five weeks working on a Keck Geology Symposium project in the Bighorn Mountains of Wyoming. I was helping with a seismic imaging project as well acquiring structural data in the Bighorn Basin for my senior thesis project.

My post-graduate plans: I plan on going to grad school at some point, either immediately after Lafayette or possibly after a year or two of doing “something else.” My professional goals are eventually to earn a PhD and start teaching, and my personal goals are to “suck out all the marrow of life” and “not when I had come to die discover that I had not lived.”