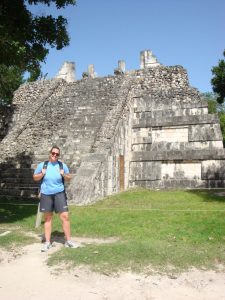 Hobbies: I love being outside, and the majority of my hobbies draw on athletic activity. I am an avid volleyball player, and I like hiking and canoeing, especially during the summer months.  I am also really passionate about traveling. I love visiting new places and meeting new people. Among my favorite places in the world I have been include Sorrento, Italy; Tangier, Morocco; and London, United Kingdom.  I also enjoy your pretty standard leisure activities like watching movies and listening to music.  I love spending time with my friends. In fact, I am pretty sure that I would be lost without them in my life. What good are hobbies without having amazing people to share them with?

Why I chose to do a self-designed major in Environmental Studies: I chose to design my own major because I had so many varying interests that could not really be fulfilled by one individual major here at Lafayette.  So I figured that I could take the liberal arts education to the next level by combining a lot of different subjects into one cohesive major.  I decided on Environmental Studies because I wanted to focus on environmental issues from the scientific as well as the humanities and social science approach.  My individualized major has given me the freedom to not just be a geology or a biology major but also a student of history, anthropology, and government and law.

Favorite Lafayette classes: I have taken a wide variety of classes at Lafayette, but I am really torn between Paleolimnology, which I took last semester with visiting professor of Geology Tim Cook, and America in the 20s and 30s with Professor Don Miller.  I think the main reason I really liked those classes, as well as the majority of classes I have taken at Lafayette, is that all of my professors are truly amazing people and it is obvious that they just love teaching.  Paleolimnology also gave me the unique opportunity to participate in semester-long fieldwork, and there is something about spending hours on a frozen lake that you do not forget.  I liked my American history class because apart from Professor Miller having so many unbelievable experiences, he also encouraged us to really voice our opinions during class, and for people that know me, they are aware that I enjoy participating in class.

I’m passionate about: While I see a lot of environmental issues as important to our society, I have always been personally concerned about the deforestation of the world’s forests.  I think that my feelings about deforestation have stemmed from watching my hometown become subject to over development.  I have basically watched the rural area with natural forests become a growing suburb complete with housing developments where everything looks the same.  It is our job as stewards of the earth to protect these natural areas, and I have realized that does not mean just in my own backyard but all over the world as well.

Summer internships I’ve completed: In the summer of 2009, I interned at the US Embassy in London in the Environment, Science, Technology and Health Unit.  I got a first hand look at environmental policy on the international scale, and I learned how far behind the United States is in the environmental movement, not only in reality, but also in the perception of the international community.  I attended conferences, parliamentary hearings, and conducted interviews with high-level officials on everything from energy policy to nanotechnology to the bleaching of Caribbean reefs.  In summer 2010, I interned at the Monroe Country Conservation District.  I was able to help teach young children about the environment, which was especially rewarding because I remember going to the center when I was in elementary school and taking part in similar activities.

Outside the classroom: Since cutting my own athletic career short due to injury, I have taken up a new activity as an assistant coach for the Lafayette Men’s Club Volleyball team.  I have also been involved in the McKelvy Scholar House program, Student Ambassadors, and The Lafayette newspaper.

After Lafayette: I think over the course of my time here at Lafayette, I have had dozens of different career plans.  At this particular moment in time, I think that I would like to go into the world of academia whether that is through doing purely academic research or becoming a teacher in some capacity.  I want to build on the foundation I have received here at Lafayette and take it to the next level.  I am thinking of studying environmental anthropology and archaeology, as I have always been fascinated with the relationships between humans and their environment across space and time.